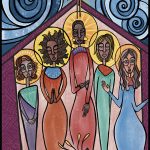 Beginning June 10th, we move into the Campbell Room for worship and fellowship (and cool air).  This summer we will be focusing our worship on ordinary people of faith in the Bible and what they might teach us.

Summer Choir – if you’ve thought about singing in the choir but couldn’t make the weekly rehearsal commitment, then come join the summer choir.  Rehearsal is at 9:20 in the Campbell Room right before worship. 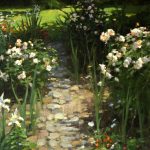 It’s a bit strange to decide to do something that you’ve worked pretty hard all your life trying to avoid.

Last summer after the General Assembly adopted the resolution calling on churches to get involved in the Poor People’s Campaign, I decided that I needed to get involved and to ask all of you get involved as well.  So as information became more available I signed the pledge to support the campaign, asked the Trustees to send financial support, and decided that I was going to attend as many of the rallies as possible.

So I went down to the first rally knowing I needed to be back in Cleveland for the last Newcomer’s Gatherings.  The following two weeks I ended up with other commitments that kept me from going.  Then this past Monday (June 4) I decided that I would volunteer for the direct action.

Nine of us were arrested when we sat down in the middle of State street blocking traffic and I learned a few things.

In the overall scheme of things, what I and eight other people did in Columbus was not all that much.  Others have risked more and suffered far greater consequences in the fight for justice.  But it has taken and will take untold numbers of small actions to continue to bend the arc of the moral universe toward justice.

What will you do?
Peace,
Pastor Roger

HCC’s annual meeting was June 3rd after worship.  The congregation heard from this year’s Peace Award winner, Claire Hawk, as well as voting on officers for 2018-19 and approving a new constitution.  The Annual Report, new constitution, and a report from the RenewalWorks Task Force are all available in the church office.

June 24 HCC will host a dinner open to the community for all who wish to build community and strengthen neighborly bonds. Thanks to assistance from the Cleveland Foundation, we are able to offer a catered dinner at no cost to the church or guests. Join us for food, fellowship and conversation about what makes this community special! Let Kate Gillooly know if you would like to help host that evening here in the Campbell Room.

HCC Youth off to Camp Christian

Our music director, QinYing Tan, has been admitted into the Bach Competition Leipzig 2018, the harpsichord discipline.This competition is organized by Bach-Archiv Leipzig in Germany, and will take place from July 12th-22nd 2018.  Ying will be performing pieces by Johann Sebastian Bach, François Couperin, and Johann Kuhnau for the competition.

Our Daily Bread devotionals for June, July and August are available, as usual, in baskets on the Campbell Room and Narthex tables.  Pack one away for your vacation and enlighten your travel time with these delightful scriptural illustrations.
Top